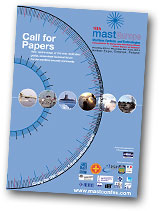 Dodging the December/January Doldrums, MAST’s TCC has received its most internationally diverse range of papers ever.

Similarly, in the adjacent exhibition many confirmed exhibitors are new to MAST, so visitors/delegates will meet several new faces this year.

The 2013 programme is therefore already guaranteed to be the most global yet, but prospective authors are reminded that the CALL FOR PAPERS CLOSES TODAY.

Get the inside track on procurement plans for future capabilities

“I intend to present those results of the strategic review of national security congruent with the theme of the event and nature of the audience, with valuable information for those participating.”

Poland’s Ministry of Defence has announced a boost to its already 6% increase in 2013 Navy budget (to zl683m/$221m), by a further annual zl900m/$291.8m to acquire naval weapons and vessels, presenting serious business opportunities for MAST exhibitors and authors (4th–6th June in Gdansk, Poland).

Poland’s maritime security/defence procurement plans up to 2022 include two submarines, two ships (a third vessel by 2026), 70 helicopters (nine for the navy), and weapons such as a second ground-launched anti-ship missile system.

Not surprisingly then, the MAST Europe 2013 exhibitor list already features more shipbuilders than usual (including German submarine manufacturer TKMS GmbH), plus those systems and component suppliers, hoping to work with prime contractors.

Most excitingly, adjacent Gdansk harbor is the intended location to host ship tours. With a Russian Coast Guard vessel already confirmed, MAST’s organisers are waiting on confirmation of invitations to the German Navy to bring a submarine (of the type bidding for the submarine programme), Sweden (Visby Corvette), Denmark, Finland, and other NATO navies, such as the US taking part in ‘BALT Ops’ in Poland later in June.

Also next to the exhibition hall, a live demo will be offered to host aircraft of those MAST 2013 exhibitors bidding for Poland’s helicopter programmes.

“Without losing the technical content value, information exchange, and convivial atmosphere for which MAST is renowned,” comments MAST CEO, Warren Edge, “timings of these significant commercial opportunities couldn’t be better for our exhibitors, and will present a huge commercial buzz around this year’s show.”