If you are a member of the press and deal with defence issues, then please Join our Media & Press List.

What the Papers Say 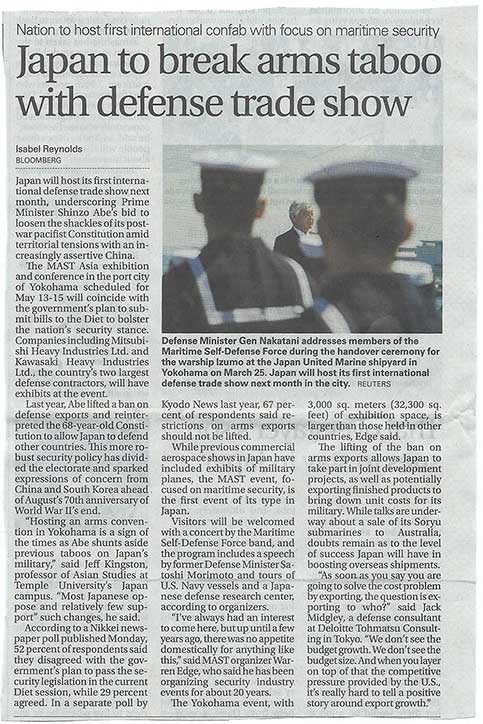 Following is an approximate translation from the original Russian:

Japan will host an international exhibition of arms called MAST Asia 2015. This event will be the first in the history of the country. Companies from more than 40 countries on 13–15 May will present the achievements of the defense industry in Yokohama.

It is expected that foreign manufacturers will focus on the technologies applied to the sea. Exhibition sites are spread over three thousand square meters. In addition, a series of discussions and round tables are planned in which experts will discuss the prospects of the industry.

Experts point out that Japan is not an accidental host to an exhibition of weapons. The event reflects the policy of the current Prime Minister of Japan Shinzo Abe, who is trying to review the status of the SDF country. The politician is interested in Japan beginning to play a more active military role in the world. This is particularly evidenced by the fact that about a year ago an initiative from the same Abe lifted the ban on the export of Japanese weapons.

Some political scientists emphasize that such actions of the Prime Minister says only one thing: he wants to get rid of the taboos that have been imposed on the Japanese military after World War II. It is seriously concerned about the neighboring countries, especially China and South Korea.

Meanwhile, most of the population of Japan did not support such actions of their government. As the results of the poll, published on Monday edition of “Nikkei”, 52 per cent were opposed to the revision of the country’s defense policy. At the same time only 29 per cent agreed with the plans of the Japanese prime minister.

Add that Shinzo Abe has a quest to support the United States who are interested in the participation of Japanese Self-Defense Forces in various international missions.

Media: Increase your number of subscribers by supporting MAST Europe and MAST Asia

In order to achieve a balanced, mutually beneficial arrangement between MAST and its media supporters, the following charter is drawn for arrangements.

MAST will provide the media partner with:

In exchange, the Media partner should: